Skip to content
Home > Health > How to get rid of stomach pain at night ?

People with gastric reflux are constantly on the lookout for alternative treatments that could ease their pain.

However, everyone is different.

Which means that what is good for one may not necessarily be good for the other.

Among all the natural remedies that can relieve stomach pain, we can mention honey.

Of all the individuals who test honey for relief of gastroesophageal reflux disease, the majority have previously used drugs intended to treat GERD without any success, the other party does not wish to use specific drugs and falls back on a natural option.

Whatever the case, you should keep in mind that taking gastric reflux medication is partial treatment.

The antacid drugs or substances known as PPIs (proton pump inhibitors like omeprazole, esomeprazole or rabeprazole) do not target the disease.

On the contrary, by ingesting these substances, we only target the symptoms, acting as soon as the discomfort or pain appears.

Honey, what kind of honey?

There are specific honeys that are good to know in order to use a natural product that gives you real benefits.

The first step is to find raw honey directly from a beekeeper if possible.

For digestive comfort, it is best to opt for acacia, rosemary, sunflower or dandelion honey.

Manuka honey remains the ultimate. Although very expensive, it has unique properties.

From Manuka, a tree in New Zealand, the Maori people have used it for millennia.

It differs from other honeys by a unique antibacterial action.

Unlike the others, it does not contain hydrogen peroxide, it is even said that its action is non-peroxidic.
But despite this nuance, it is the only one capable of wiping out Staphylococcus aureus.

Also, if you only need one honey, Manuka will be this one.

The properties of honey

Honey is well known to provide relief from many illnesses.

In fact, the most obvious action of honey on the mechanisms of reflux is based on its three major properties.

But to be truly effective, it needs to be made up of different sources of nectar.

That’s why not all honeys are the same.

It contains natural hydrogen peroxide and its effectiveness has been proven over and over again in the repair of deep wounds.
Manuka honey – which does not contain hydrogen peroxide – is also used in hospitals.

This substance is so effective that dressings dipped in honey significantly reduce healing time while disinfecting ulcers caused by diabetes.


It is rich in antioxidants due to the flavonoids it contains: pinocembrine , pinobanskin, chrysin, galangine, quercetin, luteolin, kaempferol .

The number and variety of polyphenols contained in honey provide antiproliferative activity and thus act on tumors of various cancers.

Additionally, it is an immune booster for patients undergoing chemotherapy.

So we see that honey can also be very beneficial for people with digestive disorders and acid reflux is no exception.


How to use honey in gastric reflux?

Lemon is acidic, suggesting that it is contraindicated for people with stomach problems.

But, lemon water has been shown to have a crucial impact by acting against acidity which is very damaging to the lining of the esophagus.

The recipe for honey and lemon tea is as follows:

– You mix a tablespoon lemon juice in hot or lukewarm water and consume this mixture a few minutes before the meal.

– Of course you add two tablespoons of honey.

Again, personal experience is crucial and you need to find what works best for you. 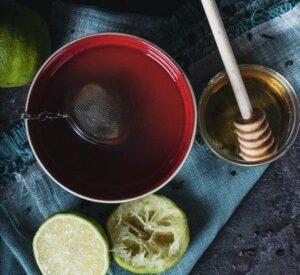 Apple cider vinegar is an excellent natural remedy for the stomach with its antibacterial and antifungal properties.

However, you need to find an organic, unfiltered apple cider vinegar containing the mother to benefit from all its virtues.


You can further increase its effectiveness against inflammation by adding honey.

The recipe is then the following:

– You mix two tablespoons of apple cider vinegar with one tablespoon of honey, which you dilute in a glass of water.

Ginger for acid reflux, in tea or other form, is one of the best natural remedies.
But it’s also obvious that ginger tea is not a pleasant drink, which is why honey is added to it.

This combination is certainly the most effective natural remedy for heartburn.

Another way to benefit from the multiple virtues of honey is to combine it with yogurt.

All it takes is a base of yogurt and two teaspoons of honey to get quick relief.

This is a very interesting alternative that one can easily compose when faced with a serious reflux.

Cinnamon and honey recipe is simple:

– You mix honey and cinnamon powder (always use organic Ceylon cinnamon) until it forms a paste.

You can consume this preparation occasionally at the time of pain or enjoy toast for breakfast.

This natural drink is an anti-inflammatory remedy that also helps reduce the production of intestinal gas.

By reducing discomfort, its properties improve digestion and decrease excess acidity in the intestine.

Cinnamon acid reflux is as follows:

Manuka honey should be preferred. 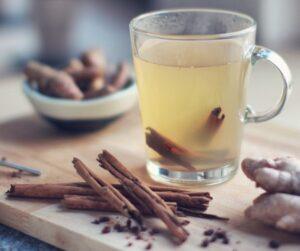 Honey is excellent for treating GERD.


It protects the lining of the esophagus from the aggressive acidity contained in the stomach.

It protects it and therefore burns are less felt even during acid reflux.

Honey has a high viscosity, which allows it to stay on the mucosa longer.

Compared to drugs that are supposed to have the same effect, honey works better over time.

When to consult a gastroenterologist?

You have the option of implementing an appropriate diet combined with natural remedies.

But if you can no longer manage your GERD this way, it is safer to see a gastroenterologist.

If you notice more severe symptoms like chest pain, blood in saliva or black stools, inexplicable weight loss or swallowing difficulties, do not delay in making an appointment.

You may need specific medications even if you have changed your eating habits.

I await your feedback in the comments.

Arthritis, how to calm the pain?
How to Stop Herpes Outbreaks at Home?
Cerumen | 7 Methods to Dissolve It

Looking for health tips?
You prefer natural remedies when it is possible to replace them with medicines.
You are going to love this blog!
All the articles you will find here are derived from my personal experience and especially from my passion for natural health.
Feel free to follow me if you are also sensitive to another way to deal with your little health concerns.
I am Marie and am very happy to welcome you into my natural universe.

gomedica.org contains affiliated links that echo my recommendations.
It participates in Amazon’s Partners Program, an affiliate program designed to enable sites to earn compensation through the creation of links to Amazon.com